What's on this Page

What is a PST file?

PST File format specifications are available from Microsoft as free and irrevocable free patent licensing through the Open Specification Promise.

PST file formats are categorised in two types based on the encoding of file type. ANSI encoded PST files are older file formats and are supported by Outlook 2002 and earlier versions only. Such files have a maximum size limit of 2 GB (2^^31^^ Bytes) and do not support Unicode. A more modern file format type, based on Unicode encoding, removes the file size limitation and can reach maximum data size of 50GB.

At the base of PST file format lies B-Tree that keeps data sorted and allows searches, sequential access, insertions, deletions etc. in logarithmic time. The overall structure of a PST file is organized in three layers. 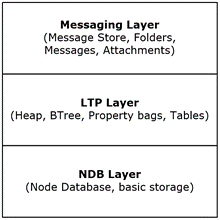 Lists, Tables and Properties Layer - LTP layer provides the logical understanding of higher-level concepts on top of NDB. Besides other elements, LTP layer mainly comprises of Property Context (PC) and Table Context (TC). PC is a collection of properties, while TC represents a two-dimensional matrix of collection of properties vs. the presence of these. Efficient implementation of PCs and TCs, the LTP layer uses following two types of data structures atop NDB Node:

Messaging Layer - Higher level rules and business logic for working with PST files is implemented at this layer. The logical output of this layer results as Folder objects, Message objects, Attachment objects and Properties which is made possible by combining LTP and NDB layers. Rules and requirements, which need to be followed when modifying the PST contents, are also defined at this layer.

High level of file organization of PST file is as shown in the figure below. This is just an overview of different concepts from logical elements of PST file.

For security, PST files can also be password protected which requires the loading application to apply password before it can be viewed. Password applied to the PST file is stored in message store. However, this does not provide strong data protection as the password can be removed by available tools. Also, user specified password is not used as part of key for encoding and decoding cipher algorithms. Thus, there is no benefit of protecting data to be accessed by un-authorized parties. Storage of password as CRC-32 hash of the original string also makes it a weak method for data security against brute-force approach.